Gift Alonge’s story is one that drives a sword into the heart. She was raped by her biological father who threatened that she would die if she opened up to anyone about the matter. But she braved the odds to cry out and paid the ultimate price as she died with her five-month-old pregnancy.

Although her 42-year-old errant father, Jacob Alonge, a farmer and native doctor, has been committed to prison, she did not live to see the man that caused her pains walk into jail.

In the words of D. Adamaigbo, the presiding Magistrate at Edo Family Court, “her father threatened her that if she revealed to the public she would die. She actually revealed it and she died.”

The late Gift was raped by her father in 2017, and he threatened her by administering an oath of silence on her. He continued to rape her until she turned 15 and got her pregnant. The bizarre incident occurred at Ososo village in Akoko-Edo Local Government Area.

The first time he raped Gift, according to the poor girl’s statement to the police, it was in the bush. He was said to have told Gift that they were going for prayers. In her statement as quoted in court, she said: “My father, by name Jacob Alonge, used to wake me up at night and said I should follow him for prayers. When we got inside the bush, he would force me and have sexual intercourse with me.”

The bubble, however, burst when Gift became pregnant last year. Members of the Braveheart Initiative Organisation (BHI) took up the case. They arranged for counselling and ante-natal care while her father was arrested.

At the Ososo Police Station, he was said to have made a statement confessing to the crime of incest, and the case was transferred to the family unit of the State CID in Benin City. Gift was offered shelter by her maternal uncle, Mr. Ukere Adagbogu, who took a keen interest in his niece’s case and was also determined to get justice for her.

Jacob was subsequently arraigned before the court and he pleaded guilty to the charges. The Magistrate fixed judgement for January 16, 2019

Tragedy, however, struck on the day fixed for judgment as Gift, her uncle Ukere Adagbogu, Rhoda Braimoh, Promise Ezekiel and the driver of their vehicle, died in an auto crash on their way from Igarra to the court in Benin City to witness the judgment.

On hearing the news about his daughter’s death, Alonge changed his guilty plea to not guilty, as he presumed that all the witnesses to the case were dead. At the Family Court, Jacob pleaded not guilty to the amended charges preferred against him.

In the three count amended charges read at the Family Court, Jacob was accused of being in possession without lawful and reasonable excuse, fetish wrap of his late daughter’s pubic hair at Okeh Quarter in Ososo village, Akoko-Edo Local Government Area.

The offences are punishable under sections 213, 358 and 214 of the Criminal Code cap 48 Laws of the defunct Bendel State of Nigeria now applicable in Edo State. On August 1 when judgment was delivered, Jacob was sentenced to 21 years imprisonment.

Alonge was convicted on all three count charges of unlawful possession of fetish wrap of the victims’ pubic hair, unlawfully and indecently having canal knowledge of his biological daughter, repeated sexual assault and for impregnated her.

Delivering judgment in the case, the Presiding Magistrate, D.I Adamaigbo (Mrs) sentenced Jacob Alonge to five years on count one, two years and 14 years respectively on count two and three. The jail terms are to run consecutively.

Adamaigbo said: “He consecutively had sex with her who is his own daughter and got her pregnant and thereby subjected her to shame and emotional stress. May her soul rest in peace.

“To serve as a deterrent to others and would be offenders, we are of the opinion that the defendant should not have a space in a decent society.”

Adamaigbo said the statement of the victim and the evidence of the PW1 confirmed what the victim said that “she was five months pregnant and that she was demoralized, emotionally distressed is sufficient corroboration that the victim was indeed sexually assaulted.

“It has been established beyond reasonable doubt that the accused had canal knowledge of the victim as she said in her statement. Her statement was corroborated by the statement of the police in evidence.

“The convict admitted in his statement and the law is that evidence admitted need no further proof. The defence that he was lured into the crime by his own daughter is an afterthought. We therefore find him guilty of each of the counts.”

Reacting to the judgment, Executive Director of BHI, Priscillia Usiobaifo, said: “We have seen how resilience can prove worthwhile. I am very happy that there is no option of fine because we have had several cases that we won and they would give options of fine. This has encouraged us, and those that died did not die in vain.” 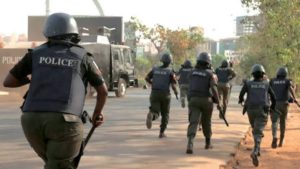