As the gubernatorial election process in Kogi state comes to a gradual halt, Yahaya Bello, the incumbent governor has been returned elected by the Independent National Electoral Commission (INEC).

TheCable takes a quick look at the electoral figures and highlights some important twists and turns, which may be baffling to any statistician and interesting to politicians — but not statistically impossible or new to Nigerians.

We compare the results from 2015 gubernatorial in the state with the just concluded elections in the region, and here are some quick takes:

In 2015, the All Progressives Congress (APC) with the late Audu Abubakar as its flagbearer polled 14,786 votes in Okene local government area, while the Peoples Democratic Party (PDP) polled 15,968 to win in the local government. The total number of voters accredited stood at 35,143.

By 2019, the APC ticket holder and incumbent governor of the state polled 112,764 votes in the same local government, recording a 662.6 percent increase in votes for the party. The PDP on the other hand polled only 139 votes. This means the PDP lost 99.1 percent of its voters from 2015. The party has called for a cancellation of votes in the region.

It is worthy of note that Yahaya Bello is from Agassa in Okene.

In Adavi local government area, the PDP went from 11,902 votes in 2015 to only 366 votes in 2019. These figures suggest that the erstwhile ruling party has lost 96.92 percent (approximately 97 percent) of its voters in the region in the past four years.

Natasha Akpoti, the SDP gov candidate, is from Okehi LGA
The narrative in Okehi local government was also the same as the Musa Wada of the PDP saw a drastic reduction in his party’s vote, when compared to the results recorded in 2015.

Natasha Akpoti of the Social Democratic Party (SDP) polled 3,095 votes in the local government, which also happens to be her home LGA.

Yahaya Bello and his running mate, Edward Onoja
The voter turnout in elections across Nigeria has been reducing over the last decade, and Kogi will be no different. According to the Independent National Electoral Commission (INEC), 1.6 million (1,646,350) people registered to vote in Kogi state.

At the end of the election, only 636,202 were accredited to vote on election day. This means 1,010,148 people did not show up for the vote, accounting for 61.36 percent of those registered to vote.

Less than 39 percent of eligible voters turned out to be accredited, while even less eventually voted correctly. 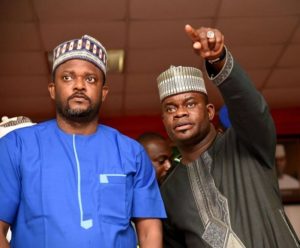