According to the agenda of the meeting, the governors would discuss the time frame for the refund of the N614 billion bailout fund issued to the States by the Federal Government.

The News Agency of Nigeria reports that the development was a sequel to the notice given to the states by the Federal Government to recover the loan facility.

The governors, according to the meeting agenda, would deliberate on getting an update on deductions for budget support facility from the appropriate organ of government.

They are also scheduled to discuss a proposal for recovery of funds due to state governments, withholding tax issues, collection of grand rent, NTEL and MTEL, among other matters.

Also on the agenda is the briefing by Governor Nasir El-Rufai of Kaduna State on the National Executive Council ad hoc Committee on Excess Crude and other Special Accounts of the Federation.

The governors would also get an update on ‘Primary Health Care Under One Roof (PHCOUR)’ and other health-related matters.

Already in attendance were the Chairman of the forum and Ekiti Governor, Dr Kayode Fayemi and his Deputy and Governor of Sokoto State, Aminu Tambuwal.

Other governors also in attendance were those of Ondo, Imo, Oyo, Cross River, Benue, Kaduna, Zamfara, Anambra and Osun States. 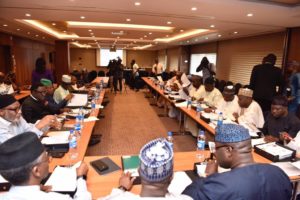