Arsenal were 2-1 down at home to Portuguese outfit Vitoria in the Europa League when the Ivorian winger was sent on by Unai Emery in what proved to be an inspired substitution.

However, Pepe bagged an even better free-kick with his cultured left-foot, this time bending one into the top bins in the last kick of the game.

The former Lille man was prolific in France last season, scoring 22 goals in 38 Ligue One games, and Arsenal supporters will be hoping their No.19 can seriously kick on after his dead-ball double tonight.

The Ivorian curls in a beautiful free-kick to level the score ? 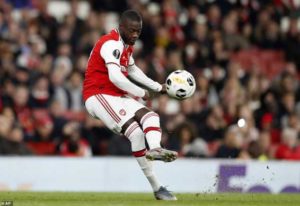