Here are 8 things you should know about the new carrier:
8. It is managed by Peace Mass Transit Limited, one of the subsidiaries of Peace Group Of Companies, owned by the Nsukka born businessman, Chief Sam Maduka Onyisi, MON. The companies are over 17, including Futon International Limited, the Exclusive Importer of Peace Hiace (UGAMA).

Peace Mass Transit has been in business since 1994.

7. Sunshine Travels is based on Driver-To-Owner policy, in which the driver of the buses will own the buses after paying for the said buses – just like hire purchase. This would make drivers responsible and give them a sense of ownership, check accidents and empower them. It is going to create jobs for drivers from Ondo and bring IGR to the State.

This policy was already in place in Peace Mass Transit, effective July 1, 2019.

6. All the buses used by Peace Mass Transit is UGAMA Hiace, a Chinese copy of Toyota Hiace (a brand owned by Chief Sam Maduka Onyisi, MON) are powered by 2.7L, 4-cylinder engines, are used by Sunshine Travels.

5. All the Ugama Hiace is assembled in the Industrial town of Emene, Enugu State, which started in 2016 to assemble Completely Knocked Down Parts of the buses. They were licenced for this by the Federal Government.

4. All Peace Mass Transit Parks are used by Sunshine Travels for bookings and loadings.

To also ensure safety, there are PMT Patrols stationed in several places across Nigeria to checkmate the drivers (overspeeding and so on). This would also check Ondo Sunshine Travels’ Vehicles and Drivers.

2. All vehicles of Sunshine Travels is also serviced by Peace mass Transport.

1. It is the official People carrier of Ondo, the Sunshine State of Nigeria as well as other passengers. 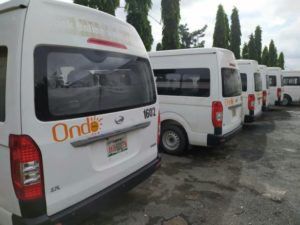