CAMPUS GIST reports that Dangote, Chairman of Dangote Group, made the donation at the 22nd convocation ceremony of the university, on Saturday, October 19.

Both donations came during the formal launching of AAU Endowment Funds, which the Edo State Governor, Mr Godwin Obaseki oversaw.

Governor Obaseki, on his part, promised two megawatt Turbine for 24 hours power supply, and the construction of 2km road inside AAU campus.

The Governor also announced the donation of free WiFi connection for everyone, which he said will launch all those within the school environment on the internet.

CAMPUS GIST reports that today’s event, which is the 4th day since the ceremony started, saw the award of higher degrees and honorary degrees to recipients.

Other dignitaries at the ceremony include the Etsu Nupe, Yahaya Abubakar; Edo State Assembly Speaker, Mr. Frank Okiye, among others.

Gambia’s Minister of Trade represented his boss and the country’s president, Adama Barrow, who is billed to receive a honorary degree.

As at the time of filing this report, the ceremony which began at 10.a.m is still underway at the AAU Cordelia Agbebaku main auditorium, in Edo state. 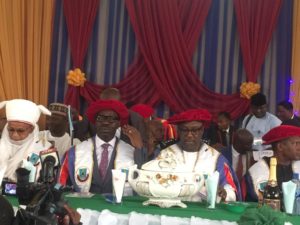