The five kidnapped leaders of Academic Staff Union of Polytechnics in Oyo State have regained freedom on Saturday night.

The police Public Relations Officer, Mr Gbenga Fadeyi, told our correspondent that he was yet to be briefed of the development as at the time of filing this report.

But sources said they were allegedly released after payment of five million naira ransom.

A source from the institution told our correspondent on condition of anonymity that the abducted leaders regained freedom after the payment of the said ransom.

The ASUP Chairman, Opadijo Oluyide, his Secretary, Mr. Gbenga Alayande and three others were kidnapped on Thursday night while returning from Saki, in Oke Ogun area of the state.

The union leaders had attended the Joint Action Committee of unions in all the six Oyo State-owned tertiary institutions at Oke-Ogun Polytechnic, Saki.

He said that the five million naira ransom was contributed by members of staff of the institution to secure the release of the leaders.

The source said, “We just secured their release this night after payment of five million contributed by our members.

“I want to tell you that we have lost confidence in the Nigerian Police Force. Those who kidnapped our leaders were Fulanis.

“We are going to stage a protest to the government secretariat to remove totally the ‘Kara’ market in this area. We will down tools until the market is totally removed” 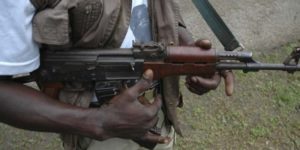