Chairman/Chief Executive Officer of the Nigerians in Diaspora Commission (NIDCOM), Abike Dabiri-Erewa, has said that the intervention of the African Union (AU) would be key in ending attacks on Nigerians in South Africa.

Mrs Dabiri-Erewa said this on Twitter in reaction to the latest attacks on Nigerians in South Africa.

She said that although she could not verify most of the videos of the attacks, whatever decisions needed to be taken could only be done at the ministerial level.

“Sad, Reports from South Africa attacking foreigners. I can’t verify most of the videos. However, whatever decisions to be taken now can only be at the ministerial level. AU intervention may be crucial. This is not what we should be doing to ourselves as Africans,” she said on Monday.

President of the Nigeria Union South Africa, Adetola Olubajo, had said that recent attacks began on Sunday morning in Jeppestown area of Johannesburg.

Mr Olubajo said in a statement on Monday that the mob “looted several shops that were around the vicinity suspected to be owned by foreign nationals.”

Three persons were killed in the attack while another is still receiving treatment for smoke inhalation.

Olubajo said the police later dispersed the mob and made some arrests. 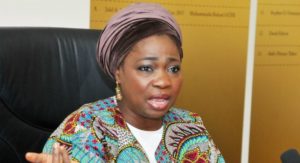