Adams Oshiomhole, the Chairman of the All Progressives Congress, APC, is not my friend, neither is he my enemy. But, I always feel sorry for any individual, who, through years of brutal struggle, sweat and tears finally reaches the top where fame and fortune await him but loses a lot on account of a basic character flaw. Oshiomhole might not realise it, he is an endangered person in Nigerian politics generally. Like a man who had strapped on a belt of explosives in a crowded room, now constitutes a safety risk to himself and others around him. There is probably no other political figure who daily multiplies the number of his political adversaries as the Chair of the APC. He seems to have forgotten the warning made repeatedly on this page that in the political game: “A man alone hasn’t got a chance” (Ernest Hemingway, 1898-1961). Increasingly, the man who should be the second most important rallying point of the APC, after Buhari, has now acquired the image of its uncontrollable destroyer sowing discord everywhere , attracting maledictions from members who should be subservient and uniting the rank and file against himself. He most probably will not last until 2023 unless there is a revolutionary change in his approach to leadership.
“Oshiomhole Creating More Problems For APC.” DAILY INDEPENDENT, October 28, 2019.

One of the leaders of the APC as well as one of its most powerful voices made that assertion. He is from the Niger Delta. Everybody is now aware of the “fight to finish” raging in Edo state between Adams on one side and the Governor as well as the State Commissioner of Police on the other side. Since politics is war by other means, Nigerian historical precedents would suggest that the Abuja-based Chairman will be annihilated by his antagonists. Of all people, he should know that the Nigerian State Governor is one of the worst dictators human beings had ever created. Enveloped in legal immunity while in office, he is lord of the estate; he can do virtually anything including acquiring the land on which your palatial mansion is situated – “for public purposes”, of course.. By comparison, the Chair in Abuja would need the full support of the President as well as members of APC executive committee, to move against the Governor. Even with that help, victory remains un-assured. The question is: will Buhari support Adams? A corollary question is: why would the President do that?

Despite the fact that the bearer of bad news is never welcome, I will still do Oshiomhole a favour and damn the consequences. His rag-tag band of defendants, mostly political mercenaries, will send blistering rejoinders and hope to be rewarded. I understand that scavenging is also part of politics. The hyenas must eat and I have provided a meal. Still, there are two closely-linked questions to answer. Incredibly, it doesn’t require rocket-science intelligence to know what Aso Rock will do. Buhari will stay neutral. That is the bad news for Adams. The worse news is the reason why the President will not bother to save the Chair.

Buhari will stay out of it because, with the second term secured, he no longer needs the Chairman. Only a set-back at the Supreme Court can result in an appeal for support from the party Secretariat. Even there, the man does not enjoy unanimous endorsement. Like the rest of Nigeria, the APC party headquarters is divided over their leader. Some are so angry; they would throw him out today – if they have their way. They might soon have their way. Buhari, as the ultimate leader of the party, can only risk his position if it is absolutely clear that Oshiomhole is badly treated and if he has political value. Truth is, it is not often clear who is right or wrong in the battles involving Adams. He cannot always be relied upon to tell the truth – which is indispensable before the President will intervene in his favour. Two examples will illustrate the point about veracity as a pre-condition for joining a crusade led by Adams.

On the podium two or three years ago, at a VANGUARD ANNUAL ECONOMIC FORUM, were Dr Fayemi (then Minister of Solid Minerals), Professor Soludo and Oshiomhole. Suddenly, Adams announced to the startled participants that Soludo had secretly withdrawn some billions of naira from the Central Bank before a policy change was announced. Soludo responded by calling him a liar. I took side with Soludo because what Adams said was totally untrue and it even made no economic sense for the CBN Governor to do what he was accused of doing. Adams, in my view, just wanted to make the headlines next day as the “defender of the masses”. He forgot that a man sitting on billions of naira which he accumulated while “fighting for the masses” has long lost credibility as the patron saint of the poor masses. There are other examples on record which will help shed light on this matter. But, let us jump to the present.

More recently, an incident occurred in Benin. Several newspapers carried the news that Oshimhole’s house was attacked by mobs in Benin City. It was darkly hinted that the vandals were supporters of the state Governor, Obaseki. I filed the story away with a red ink comment – “highly unbelievable”. The story started to unravel two days after. First, Governor Obaseki released his own statement which totally contradicted the Oshiomole story. Second, the state’s Commissioner of Police also published a rejoinder to the accusation. In the end, what transpired was a typical Adams show. Say anything to make headlines – even if it is fake news. Not being politically partisan, it has not been too difficult for me to know that Governor Obaseki was the truthful party.

That brings us to the abiding issue of leadership and Oshiomhole’s demonstration of it as the Chairman of the ruling party. The man is in a position to create havoc in the polity if his excesses are not curbed. The image of the elephant is quite apt in this regard. One loose cannon in high office can do more damage than ten thousand rioters taking to the streets. Henceforth, the APC has a monumental task on its hands. They have a duty to save themselves and to save Nigeria as well by doing something about their Chairman. What they do and how they do it is their business.

“In every community, there is a class of people profoundly more dangerous to the rest. I don’t mean the criminals. For them we have punitive sanctions. I mean the leaders. Invariably, the most dangerous people seek power.” Saul Bellow. VBQ p 124.

Before every election or selection, eg, Edo State APC flag-bearer for Governor, Adams invariably engages in verbal warfare with the opposition parties and members of his own party who disagree with him. Again, the conflict in Edo State is vintage Oshiomhole. He is now fighting on two fronts – PDP and APC. My researches in history, before writing the VANGUARD BOOK OF QUOTATIONS, would suggest that he has made himself the common enemy of the entire PDP and the Obaseki faction of APC. He is the one everybody wants to destroy first. He should go and read books on the Second World War. Incredibly short German dictator Hitler, 1897-1945, might have won at least one war if he faced that one alone. Britain, like France and a lot of Western Europe was almost, but not fully, conquered before he declared war on Russia. That decision sealed his fate and that of Germany. Like Hitler, Adams appears to be working extremely hard to become the architect of his own misfortune. That would have constituted only a personal tragedy if he will go down alone. But, his position precludes a solitary self-destruction. That is why the other leaders need to act speedily before the pocket-sized “Samson” brings down the roof on everybody – whether APC or not.

Last Line: Buhari owes Oshiomhole no debt of gratitude. He did not win the election on account of what Adams did. He won it, if he did, on the votes of the almajiri. And, he would not risk anything by allowing the Chairman to commit voluntary euthanasia. 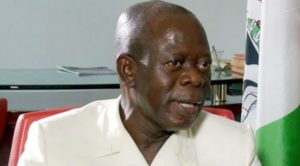