Adeboye spoke at the Holy Communion service at the just- concluded 67th convention of the church at the new auditorium at the Redemption Camp.

1, 850 pastors were ordained and 109 children born- 56 boys and 53 girls at the convention, which ended with so much excitement.

He said that whenever he is invited to some churches and they are serving Holy Communion in the day, he would decline taking simply stating: “I am fasting”.

Adeboye posited that taking of the Holy Communion at night is symbolic.
He said: “Tears may endure for the night but joy comes in the morning. The night period is symbolic. It means the end of sorrow.

He explained further the Holy Communion is a serious matter and should not be taken unworthily.

“Many are eating it unworthily that is why they are experiencing so many things they should not experience.

“You can’t come to the Lord’s Table and bear grudges and harbor hatred in your heart against your brother or sister. You will be doing yourself a great harm,” he said.

In his sermon to the newly ordained Pastor of the church, the Assistant General Overseer of the church in charge of Administration and Personnel, Pastor Johnson Odesola challenged them never to despair as they go about in task of evangelising the world for Christ.

He said that preaching the gospel message is task that must be carried out as Christians await the second coming of the Lord. 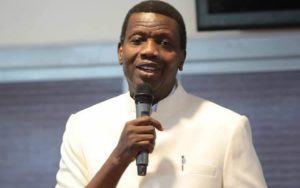