A day after sealing her place at the Tokyo 2020 Olympics, Commonwealth champion, Odunayo Adekuoroye won a bronze medal at the ongoing 2019 Senior World Wrestling Championships in Nur-Sultan, Kazakhstan. It is her third medal in the history of the competition.

After losing in the semifinal to the eventual champion, Risako Kawai of Japan, the World No. 3 in the 57 kg category outclassed Moldova’s Anastasia Nichita 10-0 via technical superiority in the bronze medal match yesterday to add to the bronze and silver medals she won in the competition in 2015 (U.S) and 2017 (France) respectively.

“As you can see, we (Nigeria) came here with five girls and a male, who hasn’t got any medal, so it was like I really needed to make my country proud,” the 25-year-old told United World Wrestling after her victory.

“I am so very happy because everyone is my fan and they have been wishing me well even before I qualified. So I am so very glad that I did not put them to shame. I’m happy.

“For my coach, Akuh Purity, I know he is proud of me now, and I am so very proud of him for training me.”

In the meantime, nine-time African champion, Blessing Oborududu (68 kg) will fight with Michelle Montague of New Zealand in the repechage today, as she eyes an Olympic ticket and a possible maiden World Championships medal. If she defeats Montague, Oborududu will face Sara Dosho of Japan for a place in the bronze medal match.

However, her namesake, Blessing Onyebuchi (76kg) was unsuccessful in her bid to land a medal as she lost to China’s Qian Zhou 12-1 in the repechage, while Aminat Adenyi (62kg) could not progress following the failure of her conqueror, Ukranian Yuliia Ostapchuk to advance to the final. 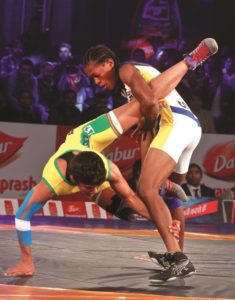