Budding star of Afro-music, a genre previously unknown to music fans in the United States, is a fast-rising Nigerian songwriter, record producer known as Akeju.

Akeju’s name is fast evolving into a household item in New York City, the city that never sleeps. He is so popular and influential, especially on the entertainment scene, that the entire city had to look forward to the unveiling of his latest single, Akeju , that was released earlier this year. The song has been on top charts since its release.

A native of Kwara State, Akeju has lived in New York city for over a decade. He is an artist in every sense of the word. Not just a musical artiste but an artist because he is all about expression, from his sense of style to his genre of music even down to working succinctly as an actor and movie producer.

The artiste, in an online interview with Vanguard revealed his plans to collaborate with more A-list artists in Africa and more surprisingly the woman that has stolen his heart.

1.Tell us about your background
My name is A. M Akeju, I was born in Ghana to Nigerian parents. My mom is from Ilorin and my dad is from Abeokuta.

2. Have you always wanted to be a musician? Yes. I started out writing songs and listening to a variety of aristes as a child; Nate King Cole, Bob Marley, Fela Kuti to mention but a few.

3.How did you discover your talent in music?

Some people actually go through life trying to figure out which path they want to take but for me, Music has always been a part of me. I
remember growing up, I was influenced by popular singers like Fela kuti, Nate King Cole, Bob Marley among others. I  have always believed that someday I would do music too.

4.What inspires your songs? Many things inspire my songs.

Experiences of friends, family, and myself; what is going on at the time in many communities. Many times I want my songs to make people feel good; sometimes people go through so much in their life.

5. Who are those top artistes you would want to have a collaboration with and why?
There are several, Seal, Youssou Ndour, 2Face idibia, Nas, Shaggy, Sade, Sting, to name a few. I admire them and I remain true to my philosophy creating a bridge between African culture and other cultures.

7. Other hobbies aside singing? Other hobbies are soccer, swimming, and just getting away from time to time. It helps me rejuvenate, get me fired up to record more songs for my fans.

9. What project are you working on at the moment? I have a few projects, I like to keep those details close and then surprise my fans. My EP “Akeju the EP ft Beenie Man and lil scrappy (love and hip – hop) ” and also my mix tape with Dj Kaywise was recently released.

Outside of music I am in corporate America working on several projects. I am the CEO and President of Aflik TV, an admin for international content at Amazon prime and I also provide content for several platforms, Netflix, Hulu, Best Buy, Walmart, Barnes & Nobles to name a few.

10. What is your relationship status now?

I am single and available.

11. You are single and available, so how do you handle your female fans?

I just appreciate them; they are fantastic; you can’t get too caught up. You can’t let it get into your head. You can’t indulge in a lifestyle where you start to slip up because you are single. But I do appreciate them and try to live up to everybody’s expectations.

12. Who is your female crush and why?

Smiles. Well to put this straight, every woman out there deserves the best. One woman that has stole my heart secretly is Florence Ifeoluwa Otedola (Dj Cuppy). I really love what she’s doing and how she has successfully carved a niche for herself in the industry. Hopefully one day we will go out on a date and have more Gelato..

I have no regrets, before making any decision, I always pray and fast for divine directions. So far, God has really been faithful to me.

14. Any word for your fans out there? Be loyal and true to yourself. If you have a dream, stay focused on it. Things don’t happen over night, remain persistent and keep pushing. Bless up!!! 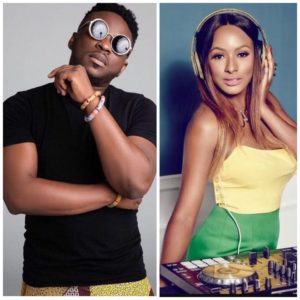