The England international was abused after missing a penalty in Saturday’s 2-1 defeat against Crystal Palace.

He is the second United player to get abused this week after Paul Pogba.

Campaigners Kick It Out called it “vile” and said “decisive action” needs to be taken.

Earlier this week, Twitter said it will meet with any stakeholders to show the “proactive work” being done to tackle abuse after Pogba was targeted following a missed penalty in the 1-1 draw against Wolves on Monday.

Rashford joins a growing list of footballers who have been subject to racist abuse after missing a penalty, with Chelsea’s Tammy Abraham and Reading’s Yakou Meite also targeted this week.

Kick It Out said in a statement on Saturday: “The vile racist abuse on social media continued today.

“This problem will not go away and needs decisive action – that is what we will be making clear to Twitter when we meet.”

Speaking before United’s Premier League loss to Crystal Palace at Old Trafford, Solskjaer called for “authorities to do something” about the problem.

In a news conference after the game, he said: “It is the same we spoke about before the weekend. It’s unheard of and we need it to stop, it needs to stop.

“I’m just lost for words if it keeps going. We keep having all these campaigns ‘No to Racism’ and it keeps hiding behind fake identities. It’s just crazy that we talk about this in 2019.” 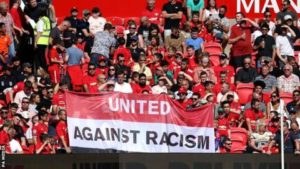