The attention of the Honourable Minister of Niger Delta Affairs, Senator Godswill Akpabio (CON) has been drawn to an article circulating online titled: “Judgement for sale in Akwa Ibom State National Assembly Elections Petition Tribunal” in which the author made allegations against the Chairman and members of the National Assembly Elections Petition Tribunal, and wishes to totally dissociate himself from the publication.

The Honourable Minister could not have been privy to the allegations made against the Judicial Officers because as a Senior Member of the Bar and a Party in the matter pending before Their Lordships, he understands the need to allow the Judges to decide the cases according to the facts. Moreover, Senator Akpabio as the Honourable Minister of Niger Delta Affairs cannot be said to be desperate to win a Senate seat but he is only contesting the outcome of the INEC manipulated results in order to ensure Justice and sustenance of democratic practice in Nigeria.

Senator Akpabio is shocked by the spurious allegation made by the Attorney General of Akwa Ibom State, Barrister Uwemedimo Nwoko, in a rejoinder to the said article, alleging that he “succumbed to blackmail and handsomely paid Barrister Leo Ekpenyong to recapitulate.” The fact is that Ekpenyong withdrew the petitions against Senator Akpabio voluntarily, when his clients made a volte face and could not substantiate their claims as contained in Ekpenyong’s affidavit which he swore to before a court of law as evidence of voluntary withdrawal of those false petitions. Moreover, Ekpenyong’s client as mentioned in the stated affidavit is linked to the current Government of Akwa Ibom State and its officials.

As an Elder Statesman, a serving Minister of the Federal Republic of Nigeria, the former Governor of Akwa Ibom State, a former Minority Leader of the Nigerian Senate and a former boss to Barrister Nwoko, decorum demands that he accords Senator Akpabio some respect. The Attorney General should substantiate his wild allegation or offer an unreserved apology to Senator Akpabio.

Senator Akpabio is a democrat who believes in the rule of law, and this informed his decision to approach the Tribunal after the charade by the Mike Igini-led Independent National Electoral Commission (INEC) in Akwa Ibom State.

Having attended many sessions of the Tribunal and indeed testified as a Competent Witness, Senator Akpabio is confident that justice will be done. He has an abiding faith in the judicial system to dispense justice without fear or favour, affection or ill will. He does not believe that any member of the Panel has a propensity to tarnish his heard earned reputation by engaging in “judgement for sale” as alleged.

The Attorney General should also have reprimanded his PDP stalwart Dr Chris Ekpenyong, whose aides have severally alleged on social media of attempts to influence the Panel judges in favour of APC with the sum of N5m.

At the moment, the Honourable Minister is preoccupied with settling down in his new national assignment and would not want to be dragged into a matter he knows nothing about.

Finally, the Minister cautions paid agents of the Akwa Ibom State Government to allow the Judges to dispense justice without fear or favour as the continuous and relentless sponsored adverts seen aimed at creating fear, intimidation and are capable of truncating the popular will of the people freely gain to the APC. 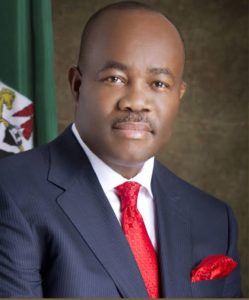