Governors of the nine oil-producing states in the country have met with President Muhammadu Buhari to discuss issues they say are of concern to them.

The meeting held on Thursday when the governors visited the President at the Aso Villa in Abuja, the Federal Capital Territory.

Briefing State House correspondents at the end of the meeting, Governor Seriake Dickson of Bayelsa State said the issues discussed bothered on security, economy and the development of their various states.

He said he was happy that President Buhari acknowledged the challenges highlighted and has promised to work towards resolving some of them.

The governor also spoke about the forthcoming governorship election in Bayelsa and called for peaceful and credible exercise. 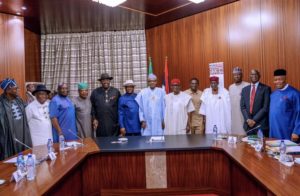