Nigeria Star Alex Iwobi has revealed his Everton team-mates have been mocking his heading abilities in training, MySportDab reports.

The winger has scored two headed goals in two games for the Bluesafter joining from Arsenal, having only ever scored one headed goal during his time with the Gunners.

Pleased that his work in training is paying off, the winger shared it hasn’t stopped his new team-mates teasing his efforts.

Speaking to Liverpoolecho.co.uk, Iwobi said: “I don’t know what’s been happening, they [teammates] laugh at me when I try to head the ball in training.

“But the practice has been paying off. I was just trying keep it on target [against Wolves]. I didn’t know I could jump that high.” 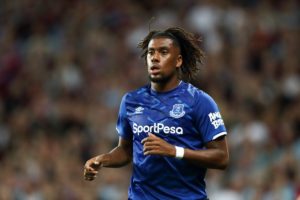