Like her song goes, Nicki Minaj can now say she has Kenneth “Zoo” Petty “right by my side” forever.

The rapper is now married to Petty after less than a year of dating. She announced the news via a short Instagram video, with a simple caption of emojis and Monday’s date, presumably when they tied the knot. Wedding accessories, like mugs saying “Mrs.” and “Mr.,” and caps for the bride and groom are seen strewn across a table. Celebrities like Christina Aguilera and Winnie Harlow have already congratulated the couple in the comments section.

Minaj had been publicly calling Petty her husband prior to the wedding. Back in June, she revealed on her new Queen Radio show on Apple Beats 1 that she and Petty had gotten a marriage license. “We did get our marriage license,” she said. “I think I have what I was striving for, just happiness. It was so hard to get to a happy place. Now that I’m there, I don’t want to compromise that for anyone or anything.”

The couple debuted their romance last December, and some fans were quick to point out that Petty had a checkered past. (He is a registered sex offender in the state of New York and served time in prison for manslaughter after being convicted in 2002). Minaj brushed off these concerns, telling commenters on Instagram, “He was 15, she was 16 … in a relationship. But go awf Internet. Y’all can’t run my life. Y’all can’t even run y’all own life. Thank you boo.” According to TMZ, Minaj has known Petty since they themselves were teenagers, and she is “confident he’s matured” since then. 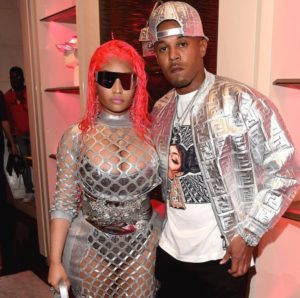