Andy Ruiz Jnr has now reportedly agreed to Saudi Arabia as the venue for his rematch against Anthony Joshua in December.

The world heavyweight champion originally had ‘security concerns’ about the fight’s location in the Middle East.

But, after receiving reassurances and a bigger purse than the original figure of £8million, the fight is now set, according to The Athletic.

Reported confirmation of the fight will come as a relief to Joshua’s promoter Eddie Hearn, who held a press conference for the fight at the beginning of August.

Billed as the ‘Clash of the Dunes’, the bout was agreed for December 7 in Diriyah.

But reports in the US said Ruiz was not happy with the money on offer, yet Hearn said the Mexican was contractually obliged to fulfil a rematch.

He told Sky Sports: ‘The contract for the rematch was signed prior to the first fight. They were both signed at the same time. There is no other contract.

‘We have to let (Andy and his team) know the time, date and venue which we have done. That’s it. They are contractually bound for the rematch.

‘There are no conversations between the two teams about not doing the fight. I don’t perceive a problem.

‘He signed a contract with us that he was absolutely over the moon with. That gave him the opportunity of a lifetime.

‘He will 100 per cent honour that contract. ‘We expect the IBF, WBA and WBO belts to be on the line.’ 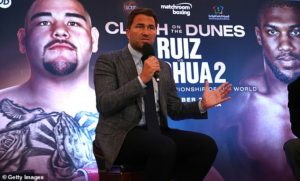