Fiorentina winger Frank Ribery could be handed a lengthy match ban after he allegedly pushed a linesman after the match against Lazio, MySportDab reports.

Fiorentina fell to a 2-1 reverse at home on Sunday night after Ciro Immobile scored a last-gasp winner for the visitors before Luca Ranieri was sent off for the hosts.

After Ribery set up Fiorentina’s goal, he could only watch on from the sidelines having been subbed before Lazio struck the late controversial winner at the Artemio Franchi Stadium.

Moments before Immobile’s decisive goal, Fiorentina were adamant they should have been given a free-kick for a foul but the referee waved play on and Ribery let his frustrations be known following thefinal whistle.

The Frenchman was filmed on camera in a heated conversation with the linesman.

He could be seen shoving the linesman forcefully not just once, but twice, as he protested.

Serie A officials later confirmed that the 36-year-old was shown a red card following the match and is now facing what could be a long suspension. 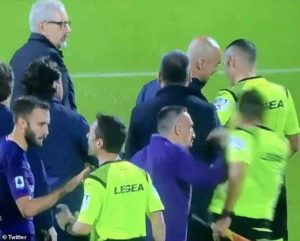