State chairmen of the All Progressives Congress, (APC) on Friday described the decision of the Minister of Niger Delta Affairs, Godswill Akpabio, to set up an Interim Management Committee for the Niger Delta Development Commission (NDDC), despite the appointment of a substantive board by the President Muhammadu Buhari as a national embarrassment and asked the President to sack him without delay.

The APC chairmen in a statement issued by their chairman and Secretary, Ali Bukar Dolari and Ben Nwoye, respectively, said: “We see the minister as a clog in the wheel of progress. He has a vested interest to annex the Niger Delta Development Commission (NDDC) as a unit of the Niger Delta Ministry where he is the minister.

“We query the rationale behind Akpabio’s hastened moves to impose an illegal Interim Management Committee in breach of the NDDC act.

“What does Akpabio intend to achieve by hurriedly appointing the committee whereas, Akpabio is aware of President Muhammadu Buhari’s appointment of a substantive board who are currently undergoing confirmation screening by the Senate?

“We view a situation where a minister exhibits crass insubordination to the office and person of the President, who appointed him as a minister, as a national embarrassment.

“We are irked by the conflicting orders one exercised by the President and Commander in Chief who effectively discharged his powers in accordance with the provisions of section 2(2)(a) of the Niger Delta Development Commission,(NDDC) ( Establishment) Act, 2000 by appointing eminent Nigerians into the governing board of the NDDC as read by the President of Senate, Dr. Ahmad Lawan in plenary only for Godswill Akpabio to appear on a national television in the evening of same day to announce a three-man committee to run the affairs of the NDDC which President Buhari has earlier appointed qualified Nigerians to oversee via his executive communication to the Senate seeking for confirmation of the nominees.

“We call on the President to sack Senator Godswill Akpabio without delay before he causes more embarrassment to this government and malign his hard-earned reputation with his uncommon illegalities.

“We call on the leadership of the National Assembly to exercise its constitutional powers to correct the lawlessness of the Minister of Niger Delta Affairs and ensure the immediate inauguration of the board upon confirmation by the Senate so as to curb the arbitrariness of a power-drunk uncommon minister and uphold the Constitution of the Federal Republic of Nigeria.” 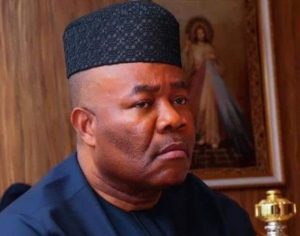