Governor Ben Ayade of Cross River State had described the All Progressives Congress, APC as a group of persons notorious for lies. He said that the assertions credited to the APC chairman in the state, John Ochala over his return to school to pursue a Master’s degree in law at UNICAL were as laughable and pathetic, adding that”the party in the state is notorious for lies.”

Yesterday, Ochala had described Governor Ayade as indolent and idle, who had time to return to school which he should have done when he was a senator or as a private person. Ochala said Ayade is bereft of ideas on how to govern the state which he said had been plagued with many problems and infrastructural decays.

Ayade in a statemnt by his chief media adviser, Mr Christain Ita said it is “funny that a party like APC which prides itself as a major opposition cannot engage the Governor on governance issues but chooses to lie to score cheap political points. If they didn’t see anything wrong with Gov Mallam Nasir El’rufai returning to school in 2017 in far away Netherlands for his PhD, what then is wrong if Gov Ayade returns to school to add to his numerous degrees within Calabar, the state capital?” The statement reminded the APC that Chief Whip of the Senate and member of the APC, Senator Orji Uzor Kalu was an undergraduate student while serving as Abia State Governor.

“The timing of Gov. Ayade’s decision to return to school is unequivocally perfect. Unlike APC members, the Governor, despite all the resources at his disposal didn’t choose any foreign University, he decided to do it locally thereby boosting the reputation of Nigerian Universities at a time tertiary institutions in West Africa are under attack. “For APC to lie to Cross Riverians that no serving Governor in the history of Nigeria has ever returned to school is unfortunate. Maybe, they just don’t have the guts to commend the Govervnor for patronising Nigeria University. “Ignorantly, Ochala also lied that Gov. Ayade didn’t go to school while in the Senate. This is very shocking. Gov. Ayade was elected Senator in 2011 and later that year enrolled in Nigeria Law School, Abuja and was called to Barr in 2012.” 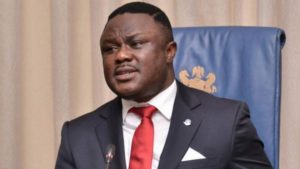