Dogon Dawa village in Birnin Gwari Local Government Area of Kaduna State is agog as the Nigeria Army is currently rebuilding the bridge linking the village to other states in the North-west, two years after its collapse. The 18-meter bridge, our correspondent gathered, was washed away by erosion in 2017 leaving residents and commuters stranded and unable to cross over during rainy seasons.

With the reconstruction of the bridge which links travelers to Kaduna, Katsina and Zamfara states, residents eagerly await its completion, in a few weeks to come, with excitement. A resident, Ibrahim Yakubu, described the reconstruction of the bridge as a relief, which he said, when completed, will make life easier for them. “When the bridge was okay it was taking me 10 minutes to get to my farm on my motorcycle, but since its collapsed, I have had to take the longer road which is about 30 minutes before I can get to my farm.”

He commended the army for brining succor to the community. Malama Aisha Yusuf, a mother of three, also said she was happy with the reconstruction of the bridge because it will reduce the cost of transporting herself and her three children to school and farm. “I never knew security agents also engage in service to communities like they are doing here. It has not been easy without the bridge because it doubled the prices of goods and services in our community.” She urged lawmakers and other government officials to key into such initiatives saying, it will go a long way in reducing the suffering of helpless communities in the state and the country at large.

The visibly overjoyed District Head of Dogon-Dawa, Alhaji Al-Hassan Al-Hassan described the intervention as a huge relief to his people. “It is a welcome development,” he said. Al-Hassan thanked the Nigerian Army and assured that the community will continue to give the army and other security operatives in the state necessary support to ensure peace and stability. The General Officer Commanding (GOC), 1 Division, Kaduna, Major General Faruq Yahaya, said the gesture is a demonstration of the Nigerian Army’s commitment to deepen civil-military relations.

The GOC, who was represented at the flag-off of the reconstruction by the Garrison Commander 1 Division, Brigadier General Jimmy Akpor, said the idea to rebuild the bridge was conceived when the Chief of Army Staff, Lieutenant General Tukur Buratai came for an operational visit to the Army Super Camp in Kuyello. “The collapse of the bridge, located along the troubled Birni Gwari axis, has left the largely agrarian communities in difficulties as to how to move their farm produce.

“The COAS on 15th July was on his way to the Nigerian Army Super Camp in Kuyelo when he ran into this collapsed bridge and immediately directed the GOC in charge of the division to reconstruct the bridge. “Nigerian Army is fixing this bridge for the community as part of civil-military cooperation. We have constructed roads, fixed bridges across the country and this is just another one,” he said. 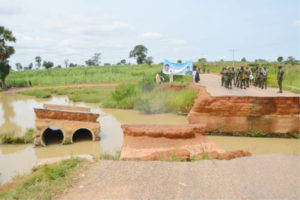