A clip trending online shows a number of supporters surrounding Aubameyang’s chrome Lamborghini Aventador as he tries to make his way home from the Emirates Stadium.

Another adds: ‘These people pay £1,800 for a season ticket… they are your support!’

It comes after Granit Xhaka was heavily criticised for telling Arsenal supporters to ‘f*** off’ during the 2-2 draw at the weekend.

Xhaka was jeered as he left the pitch after being substituted in the second half.

The incident has led Arsenal boss Unai Emery to defend Xhaka, who has said the Switzerland international ‘is devastated and sad about the situation’.watch the video…

Arsenal fans abusing Aubameyang in the middle of the street. What an absolute disgrace. "£2,000 to watch this shit, fuck off!" pic.twitter.com/1hma4RAeuJ 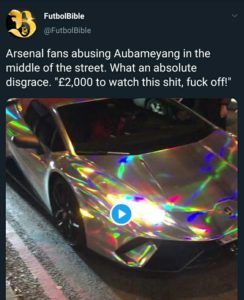