He arrived less than a year ago, and is already one of the great stars of the First Iberdrola . Specifically, on January 31 of this year, Asisat Oshoala landed in the Spanish women’s soccer competition, fully meeting all the expectations that were formed around her signing. It was an assignment that, a few months later, would become a purchase by the Catalan club.

And besides, their goals are key. As, for example, the one who scored on day 5 of this campaign, before Sporting Huelva. His was the only goal of the game, which gave Barcelona three points. Or the one who scored in Wanda Metropolitano against Atlético de Madrid last year.

But he not only scores in the national competition, as he also scored in the UEFA Women’s Champions League. Nothing more or nothing less than in the final, against Olympique de Lyon. 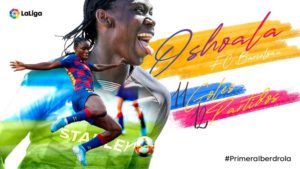