The Balogun of Imeko in Ogun State, Emeritus Prof. Anthony Asiwaju, has accused the Federal Government of being insensitive and discriminatory in the enforcement of its policy on increased border security to check the influx of imported food items into the country.

In an interview with The PUNCH on Sunday, Asiwaju lamented that tomato farmers in Imeko, a border town in the Imeko Afon Local Government Area of Ogun State, were being prevented from moving their produce into markets in Ogun and Lagos states by the Customs and Immigration officers manning the border.

According to Asiwaju, the officials stopped the Imeko tomato farmers and traders from moving their produce, on the misunderstanding that tomatoes were imported.

He said as a result of this, the farmers, who are in the middle of their annual harvest, had become agitated seeing their farm produce rotting away.

He said all the efforts made by the Onimeko to intervene had been up against a brick wall.

While describing the new border policy of the Federal Government as insensitive and discriminatory, Asiwaju said cattle from neighbouring countries were exempted from the enforcement.

He said, “We are in the middle of the harvest season, the harvesting takes just a few weeks, but there is a glut of tomatoes in the farms now; and all the tomatoes are wasting.

“Meanwhile, Imeko is also at the head of the route of cattle trade into Nigeria from Niger, northern part of Benin Republic, Mali and Burkina Faso. This border closure enforcement does not stop the inflow of cattle but the farmers, with their tomatoes, cannot move.

“Tomatoes must not go; oil must not go, corn must not go; but cattle can go. What kind of enforcement is that? That is why I call it discriminatory and insensitive.”

He said, “My advice to the Federal Government is to immediately stop the insensitivity and discrimination in the enforcement of the border closure.

“The enforcement here, as in other border communities of Ogun State, must recognise produce that are produced on the Nigerian side of the border. Fresh tomatoes from Imeko are typical. We produce tomatoes here but the markets to which they are taken are in Obada, Owode, Lafenwa in Abeokuta, and Mile 12 in Lagos.

“Loads of harvested tomatoes are ready for movement to the markets only for the farmers, traders and the transporters to be stopped. We are almost going into a situation where the farmers and the traders are revolting at the house of the Onimeko.

“If the government wants to stop everything, they should also stop the cattle. But the cattle are coming in day and night from Iwoye, north of Imeko, where the Fulani cattle herders are settled by the Federal Government in the 1990s and to which those who are coming from across the borders in Niger, Mali and Burkina Faso are taking their products into the Nigerian market at Olodo.

“The border closure does not affect that. This discrimination and insensitivity is not giving a good image to the Federal Government.” 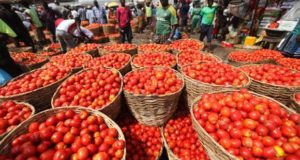