Speaking at the presentation yesterday, the Deputy Governor who holds the traditional title of Olimene of Attah said, “HRM Attah Igala as King Of the 9th Largest Ethnic Nationality in Nigeria is the face of the Igala nation and his appearance must show class,royalty and purity. We give thanks to Governor Yahaya Bello who lifted a lot of progressive minded and passionate leaders in just few years.”

Senator Jibrin Isah in his remark commended the young but vibrant Deputy Governor for believing in the land of his birth and placing the people first. “A new Igala land has emerged. This is the same way we jointly built The “Unyi Udama Amo ma Igala”( Igala Unity House) under the able leadership of His Excellency, Chief Edward Onoja and we are set to complete two guest houses at Ayingba- Dekina And Ankpa for the exclusive use of our royal father the Attah Igala. We are not Billionaires but united lovers of their kingdom.”

One of the aides of the Attah Igala commended the state governor , for the confidence he has reposed in Chief Edward Onoja, the state deputy governor. “In fact, Kogi East with has produced great sons like Sen. Ahmadu Ali , Dr Alex Kadiri, Attai Aidoko, Nicholas Ugbane,former Governors Ibrahim Idris and Idris Wada. But outside, Prince Abubakar Audu of blessed memory, no Igala son has shown love to the Igala nation like this grandson of ours, Edward Onoja has done. We thank His Excellency for believing in him”. 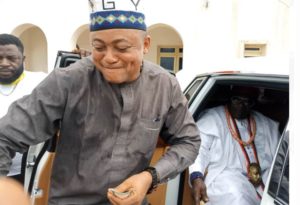