Among those that Criticised her was New Media Aide to President Buhari,Bashir Ahmad who said ” Nigerian government has boycotted the World Economic Forum holding in Cape Town, South Africa, but some individuals from Nigeria including a former Minister are attending on their own” Via his Twitter Handle.

The Cable published the news as ” Ezekwesili attending WEF on her own says Buhari’a aide, Bashir Ahmad”

Ezekwesili respond by saying The aide should be sent back to school for proper Education “Please send that aide to school to get proper education. Who told him that a private citizen like me needs their @NigeriaGov to decide my participation @wef ? Imagine.

I am doing more for our at-risk citizens.
Who has time for their nonsense politicking with citizens’ lives?”

Bashir Also responded her “Aunty @obyezeks you’re properly very educated but unfortunately you failed to understand that those who are being attacked in SA, where you’re at the moment, are also private citizens, we all thought you’d sympathize with them and boycott the @wef to properly protest the attacks”

She responded back by saying ” Let your Boss know that I am actually leading an effort here in South Africa that will help safeguard our citizens not the childish silly politics his government, aides and praise-singers constantly play with the lives of our Citizens” 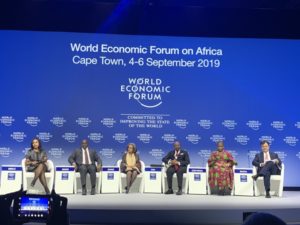