Diri who disclosed this during a visit to the state isolation centre located at the Niger Delta University Teaching Hospital in Okolobiri, Yenagoa local government area on Wednesday March 25, said when he met with Bala Mohammed at the National Executive Council (NEC) meeting, he had not been infected with the virus.

The Bayelsa State Governor also revealed that he never met with Kyari as he was in Germany at that time.

“I have no contact with Governor Bala Muhammed and Abba Kyari, the Chief of Staff to President Buhari. What happened was that in the NEC meeting, we normally sit in alphabetical order, after Bauchi is Bayelsa, so on Thursday last week, when we had NEC meeting, we sat close, and before then, he had not contacted the virus.

“During the NEC meeting, Abba Kyari was not there, we were told that he was somewhere in Germany. So, actually I am even taken by surprise, where and how the speculation is coming that I had contact with the Chief of Staff.

“For Bala Muhammed, yes, we always sit close during NEC meeting, and by then, he had not contacted the disease.”

The Bayelsa State Governor also stated that they have taken measures in protecting its water and land boundaries, and also monitoring visitors coming into the state. 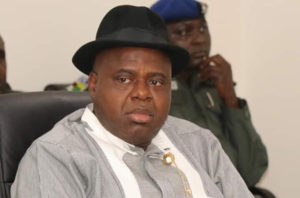