Fans of Tacha and Seyi clashed at Surulere, Lagos while both teams were campaigning for their favorites.

In a video making rounds online, both party exchanging unpleasant words at the top of their voices on the streets of Lagos.

One of Tacha’s fan, Adigun who was at the venue of the campaign explained that Fans of Tacha got to Venue of the Campaign first, and they put up a banner.

Adigun further alleged that Seyi’s Team came with Thugs, tore down their banner and replaced it with a banner of Seyi’s.

It was also gathered that Team Seyi sent “Team Tacha’ out of the stadium, because “Seyi Owns Lagos”, and “Team Tacha should go back to Port Harcourt for their campaign”. 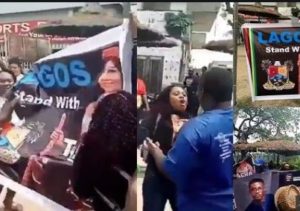