After the conclusion on the recent international break, FIFA has announced its latest rankings for all countries, MySportDab reports.

The top 10 list in the world has barely changed with Belgium still 1st, France now in 2nd ahead of Brazil in 3rd and Germany slipping more behind in the latest rankings.

Germany lost a 2020 European Championships qualifier this month to the Netherlands, which rises three places to No. 13.

Italy also moves above Germany to No. 15.

Meanwhile, Senegal remain Africa’s highest-ranked nation in 20th position, with Tunisia a further nine places behind and Nigeria 34th, while Iran are wedged in between, in 23rd place, as Asia’s leading country.

However, Kosovo, (119, plus 1) have been rewarded for their valiant showing in UEFA EURO 2020 qualifying by reaching their best-ever position in the FIFA Ranking.

The Cook Islands are not ranked in the latest standings due to not playing an international “A” match in the last four years.

The next edition of the rankings will be released on October 24. 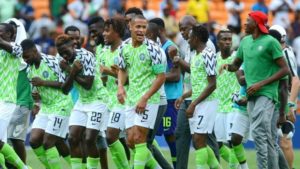