The former ”Who Wants To Be A Millionaire” host replied a Twitter user who tried to ridicule former Chelsea player Hazard by comparing his goals for current club Real Madrid to Messi’s Golden boots awards.

Frank Edoho who is a die-hard Chelsea supporter and most likely a fan of Hazard, replied the user stating that french footballer Giroud has more ”World Cups than Messi”

A female Twitter user who deemed it fit to troll Frank Edoho replied his Tweet with ”The host Who Wants To Be A Millionaire but was never a millionaire” and Edoho fired back at her with a savage comment. 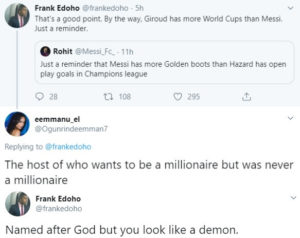