The strike force team of Zone A of the Nigerian Custom, few days ago, intercepted more rice smugglers with their bikes in a bush.

Following the developments, Nigerians are now smuggling the commodity through bush paths across several border towns.

Despite the risk of getting shot by the operatives and endangerment to wildlife, the smugglers still carry out the act.

In some videos and photos that we’ve been furnished with, several bags of intercepted rice were heaped and bikes scattered everywhere waiting to be moved to the custom’s base.

Earlier today, there were reports by several tabloids of lopsidedness across Nigerian borders, which the Nigeria Customs Service (NCS) dismissed the observation, calling for either a photograph or video evidence to prove the allegation. 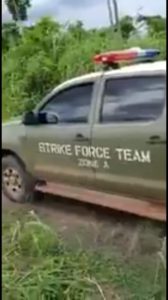