Femi Fani-Kayode has knocked President Buhari over the recent appointment of Ministers.

In a post shared on his Facebook page, the former Minister of Aviation pointed out that the North West has more substantive Ministers than any other region.

That is double the number of substantive Ministers that the South-West has been given and OVER 3 times the number that each of the other zones have been given.

The South West has 5 whilst the North East, North Centeal, South East and South South have 3 each!

May God deliver those that cannot comprehend the implications of this iniquitous and absurd distribution of substantive Ministerial portfolios.

The worse type of slave is the one that is satisfied with his servitude and the tiny crumbs that he gets from his masters table.

I guess no-one should complain that Buhari gave the largest number of substantive Ministers and the biggest and most strategic Ministries to the North West.

What on earth did you expect? The Buhari administration is a Government OF the Fulani, BY the Fulani and FOR the Fulani.

Under him, non-Fulanis are regarded as nothing more than errand boys and slaves.

Under him southerners and Middle Belters are nothing more than the biblical “hewers of the wood and drawers of the water”. 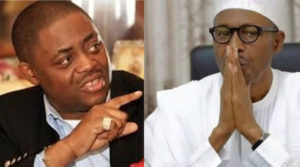