OML 11, one of the most important oil blocks in Nigeria, in terms of oil and gas production, lies in the south eastern Niger Delta and contains 33 oil and gas fields, including Bodo, Bodo West and Yorla fields.

THISDAY gathered that the operatorship of the plum asset has been transferred to the Nigerian National Petroleum Corporation (NNPC) and its upstream subsidiary, the Nigerian Petroleum Development Company (NPDC).

According to a reliable presidency source, a letter dated, March 1, 2019, with Reference Number: SH/COS/A/8540, signed by Chief of Staff to President Muhammadu Buhari, Malam Abba Kyari, to the Group Managing Director of the NNPC, said the president had directed the corporation and its upstream subsidiary, the NPDC, to take over the operatorship of the entire asset.

THISDAY gathered that SPDC had operated the block until 1995 when Ken Saro-Wiwa was hanged by the military regime of the late Gen. Sani Abacha.

Following the execution of the environmental activist, the Ogoni people, who had sacked Shell from Ogoni since 1993, also denied the oil giant access to the oil blocks.

A top official of SPDC told THISDAY last night that the company’s subsisting lease over OML 11, would expire in June 2019.

According to him, Shell had in 2018 applied for the renewal of the licence for another 20 years but the Department of Petroleum Resources (DPR) proposed to split the acreage into three because of its large size.

He also stated that Shell was also discussing with potential investors to sell its stake in the oil block as part of its divestment programme.

“OML 11 was actually under a divestment programme. Shell was talking with a Nigerian company to acquire its stake since the Ogoni people have vowed that they would not allow the company into their land. Shell has been refused access to the oil block by the communities for upwards of 26 years,” the official said.

THISDAY gathered that the revocation of the operating licence of Shell by the president was in line with the Joint Operating Agreement (JOA) signed by the joint venture partners, which empowers the NNPC to assume operatorship of the JV assets in the event that Shell relinquishes the operatorship.

Also, the most important petroleum legislation in Nigeria, the Petroleum Act of 1969 (as amended), empowers the Minister of Petroleum to grant or revoke the exploration, prospecting and production rights of the operating companies.

Buhari is the substantive Minister of Petroleum Resources. 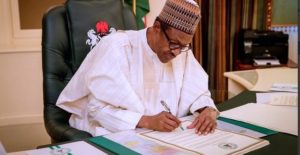