President Muhammadu Buhari has said that the incoming Ministers would be giving targets to work with, Igbere TV reports.

Igbere TV had reported that the Ministers-designate would be officially sworn in and issued portfolios next week.

Disclosing the latest development via his verified Twitter handle, Buhari said such targets would be tied to each Minister’s portfolio.

Igbere TV reports that the President added that the implementation of each target would be monitored by Office of the Secretary to Government of the Federation.

He was, however, silent on whether the Ministers would be sacked if they fail to meet such targets or not.

“The incoming Ministers, who will be sworn in next week, will receive clear implementation targets tied to their portfolios”, he said.

“We will ensure these targets are complied with; performance will be monitored by the Office of the Secretary to the Government of the Federation”, Buhari added. 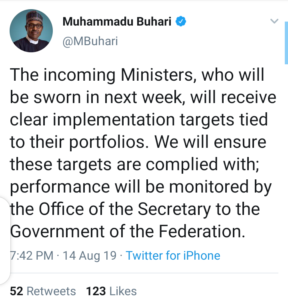