N’Golo Kante remains Chelsea’s star man but has been linked with a transfer to Juventus in recent weeks for a reunion with Maurizio Sarri.

Chelsea midfielder N’Golo Kante continues to be liked with a move to Juventus, but reports claim the star is not up for sale.

There were reports earlier this month that Maurizio Sarri was keen on reuniting with N’Golo Kante in Turin.

The reason Juventus are not prepared to move for Kante is that Chelsea value him at around £86million.

Kante is also locked down under contract with Chelsea until 2023, meaning an exit is unlikely.

But most importantly, Roman Abramovich has no intention of selling him next summer. 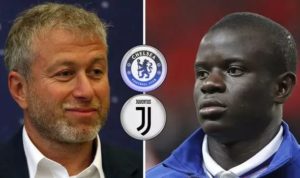