Despite the suspension of the recruitment of 10,000 constables by the Police Service Commission, the Nigeria Police Force has released the list of candidates who passed the aptitude test conducted for applicants.

The exercise has been marred by tussle for control by the NPF and the Commission which had the statutory mandate to recruit, discipline and promote police officers in the force.

It was gathered that the release of the candidates’ list on Tuesday caught the Police Service Commission management by surprise.

The Commission Chairman, Musiliu Smith, a retired Inspector-General of Police, was said to have been shocked by the decision of the IG, Mohammed Adamu, to release the list when they were yet to resolve the controversy surrounding the exercise.

The Commission had last Friday announced the suspension of the exercise pending the resolution of the issues with the police management, but the IG while addressing security stakeholders meeting in Ibadan, Oyo State, on Tuesday, dismissed the reported suspension, insisting that the recruitment was ongoing.

Our correspondent gathered that Smith got to know about the release of the candidates’ list during a meeting with the Minister of Police Affairs, the House of Representatives Committee on Police Affairs, and the IG over the recruitment.

The Permanent Secretary in the Commission, Mr Maurice Mberi, who disclosed this while appealing to the workers who staged a protest on Wednesday, said Smith had sought an audience with President Muhammadu Buhari over the IG’s action.

He pleaded with them to suspend their planned labour action and wait for the outcome of the meeting between Smith and Buhari, adding that the PSC had also sought the Attorney-General of the Federation’s legal opinion on the mandate of the commission as it related to recruitment into the police.

Mberi stated, “We were in the middle of the meeting when someone came to inform us that the list of successful candidates has been released. The Chairman, who was surprised by the development brought it to the attention of the minister.

“The IG also expressed surprise, saying he was not aware that the list has been released.”

But this elicited shouts of ‘no’ from the workers who insisted that the list could not have been released without the IG’s approval. 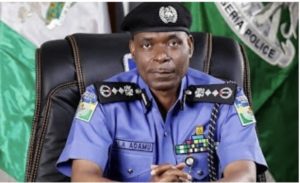