Justice Nkeonye Maha, of the Federal High Court on Friday berated the Nigeria Security and Civil Defence Corps (NSCDC) for the illegal detention of one Mr Sunday Agu, a tricyclist in Abuja.

Also joined in the suit are three officers of the Corps; Abdulmajeed Imam, Agili Chinedu and Yebage Adamu who are 1st, 2nd and 3rd respondents respectively, Igbere TV reports.

Igwe told the judge that since the applicant was detained on July 16, he had been in the Corps’ detention at David Mark Road, NSCDC Headquarter, Minna, for no justification.

According to him, his client was accused and detained by the NSCDC for allegedly standing in as a guarantor to a hire purchase agreement between one Mr Chibuike Agu (hirer) a tricyclist and Mrs Christy Ojide (owner).

Justice Maha had on Aug. 29 ordered the release of Agu from NSCDC detention if not arraigned within three days and adjourned the case until Sept. 6.

She said that the NSCDC was not at liberty to bring a charge against a person under the Advance Free Fraud Act which is under the jurisdiction of the Economic and Financial Crimes Commission (EFCC).

She warned that if such conduct continued, the Corps would let law breakers go free.

It was also reports that the Judge invited the NSCDC counsel, Mr Imam and Counsel to Agu , Mr Ifeanyi Igwe on Sept. 13. to balance justice between the applicant and defendant.

She however granted Agu bail on the terms of providing a surety with the sum of at least N500,000 in his bank account, alongside a landed property in Abuja.

She added that he should afterwards depose to an affidavit verifying the terms of compliance.

Counsel to NSCDC, Imam told newsmen that In view of NSCDC Act I, the corps is empowered to prosecute on behalf of the Attorney General of the Federation (AGF).

“By the charge, the accused person is being charged by the name of the AGF in line with section 3 of the NSCDC Act, the Act empowers the corps to prosecute on behalf of the AGF.

“NSCDC is a special prosecutor under the AGF, section 3 (1), paragraph H; the Corps shall have power to prosecute, criminal activities aimed at depriving people of their properties. 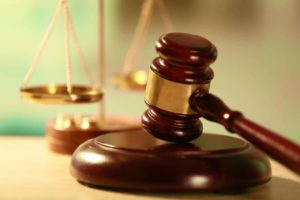