Cristiano Ronaldo has showed off his hilarious dance routine in a bizarre advertisement for Singapore company Shopee, MySportDab reports.

The Portuguese is the star of the commercial for the south-east Asian business, which is a leading online shopping platform in the region.

In the advertisment, Ronaldo curls a free kick into the back of the net before performing his trademark goal celebration.

But after members of the crowd access the Shopee app, Ronaldo is shown an orange card by the referee, is transformed into an jersey of the same colour and breaks into the ‘Go Shopee’ dance.

Once the dance routine is completed, the 34-year-old attacker announces that consumers should ‘buy everything at Shopee’. 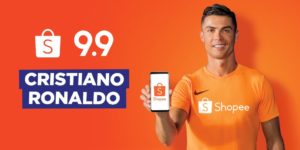