The Liverpool defender made light of Ronaldo’s absence in an interview with Dutch television station RTL7 before the Ballon d’Or gala.

When the interviewer pointed out to Van Dijk that Ronaldo’s refusal to attend meant that he had one less rival to contend with for the Ballon d’Or award the Liverpool defender replied: ‘Was he a rival then?’

But that joke has not gone down well with Ronaldo’s camp as the 34 years old’s older sister Katia slammed Van Dijk in a lengthy rant on Instagram.

Let’s drop a few lines from her long rant on Instagram.

‘I think there are people living completely frustrated !!! And unrealistic… such humility!’ Katia wrote.

‘It is well known that Ronaldo will not win tonight’s prize. Although I have won important collective titles … but this is another conversation and that up ahead we will see where the truth about football will come !!!

‘Now, dear Virgil, where you are going, Cristiano Ronaldo has gone and has come a thousand times.

You see, my dear Virgil, that Cristiano Ronaldo was a tri-champion in the country where you have been playing for years and you still haven’t got your hand in the can.

‘Cristiano Ronaldo was even the best player and best scorer in the country where you play Virgil. By the way, I was even younger than you.

Wow!! She gave him ? ? ? but was it really necessary to lash out at him this way? 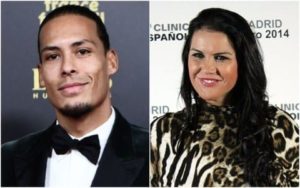