The ongoing screening exercise and scouting of soccer talents by 60Goals Soccer Stars Project has continued in Abuja as it holds a 3day screening exercise at Area 3 Football Pitch from the 23rd to 25th of October 2019 in Abuja. The Abuja final first phase of screening recorded quite an overwhelming turnout of football talents with keen interest to participate in the project.

The 3 days screening exercise was officially kicked off by the Former Minister pf Sports, Solomon Dalung and was quite coordinated by foriegn Coach Oleg Dziuba from Ukraine, Coach Gianfranco Guozzoli from Italy and other soccer experts. During the exercise, over 45 teams participated, with 990 football talents screened on the first and second day of the exercise, but 122 players where shortlisted and screened.

On the third day, during the final drilling, only 30 players were selected and confirmed to be promoted and endorsed with international signing deals as reward and encouragements for their crafty football skills and qualified to be part of the Abuja final camping.

The former Sports Minister, Solomon Dalung who has been behind the Project while he was in office expressed his confidence over the prospects as he has met and interfaced with international partners and clubs who came to Nigeria to identify with 60Goals soccer stars project. He assured of his continues support and calls on Indigenous organizations and individuals to identify with the talent scouting project as they resume camping in Abuja.

Speaking with participating football talents, they expressed appreciation to 60Goals Soccer Star Project Team and support of Hon. Ned Nwoko Foundation, for such initiating the impact empowerment initiative to boost and encourage youth development by advancing our local soccer talent and the industry in entirety.

Responding to interviews from cross section of Journalists, Prince Ned Nwoko Foundation representative Miss Philcy Anayo said the initiative will not only empower youths but will also reduce crime rate from the street since it will help the selected players make a living for themselves and families. On behalf of Hon. Prince Ned Nwoko, she commended the organisers and congratulated the selected talents after the painstaking exercises.

According to the National Coordinator and FIFA intermediary Agent, Ms Jane Ndubuisi thanked the entire team members of 60Goals Soccer Stars Project for their efforts in successfully concluding the first phase of the project, as they prepare for camping and training of over 150Football talents that were shortlisted during the screening exercise held in Lagos with 360 paeticipants, Delta state with 537 participants, Anambra state with 230 participants and Akwa Ibom State with about 632 players.

Camping for the few selected players will commence on 18th of November and will run through 10days, as international agents and observers will be present to carefully scout, monitor and supervise players during the exercise. However, the camping is open for partners and sponsors who could identify with the exercise while the scouting continues in camp.

Francis Ikechukwu, the project manager and Former under 21 National Player has commended efforts of its partners in the role they played in advancing fruition for the project. He thanked Prince Ned Nwoko, Solomon Dalung, Chief Prince Ndubuisi, Hon.Nse Essien, Top Flight Football, Fullham FC, Ibom Hotel, StatePress,
Supersport, Amity Global Network, and especially Grand Cubana Hotel, Jabi for the hospitality they received, as he anticipates more progressive and profitable relationship with the hotel ahead of the Abuja Camping exercise, the Phase2 of 60Goals Soccer Star Project. 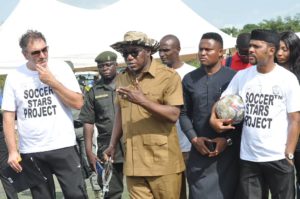