Candidate of the All Progressives Congress (APC) in the November 16 governorship election in Bayelsa State Chief David Lyon has promised to change the state for the good of all Bayelsans through good economic policies and human empowerment. Speaking yesterday during the inauguration of the governorship campaign council of the party in Yenagoa, Lyon said the task to defeat the ruling PDP in the state is a collective one, which must be done on November 16, 2019 to end hardship and hunger among the citizens of the state.

“Everyone has seen the hardship in Bayelsa State. We are in total darkness; we cannot continue to remain a civil service state, that is why we will change the narrative together come November 16. “We are going to government house to banish hunger, poverty, insecurity, darkness and dictatorship,” he said. A former deputy governor of the state, Rt. Hon. Peremobowei Ebebi, who recently defected from PDP to APC, promised to put in his best in ensuring that APC wins the governorship election. The campaign council is led by the Minister of State for Petroleum Resources, Chief Timipre Sylva, as Director-General, while Prof. Seiyefa Brisibe is alternate Director-General. Mr Eddy Orubo, Christopher Enai, Chief Sonme Ogilogi and Barr. Festus Daumiebi are Deputy Director-Generals, while the state secretary of the party, Alabo Martins, is the campaign secretary. 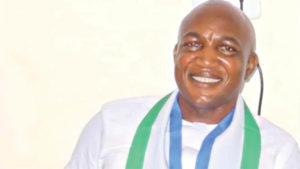