Leaders of the All Progressives Congress (APC) in Tuomo Ward 3 in the Burutu Local Government Area of Delta State have rejected plans by the former Minister of Niger Delta Affairs, Elder Godsday Orubebe to defect to the party.

There are reports that the former minister was already finalising plans to join the APC from the Peoples Democratic Party (PDP) following his recent clash with Governor Ifeanyi Okowa of Delta State.

Orubebe had recently called out Governor Okowa to give an account of the huge allocation accruing to the state under his administration after his alleged preferred candidate could not make the list of commissioners in the state.
But APC leaders from his ward, have, however, kicked against Orubebe underground plans to defect to the ruling party.

In a statement signed by the Ward 3 APC chairman, secretary and its leader, Warebi Edonyanbo, Ofumu Welkper and Peres Oloye respectively, urged the party both at the national and state levels not to admit the former minister into the party.

The party leadership said credible information at their reach indicates that the former minister, who is from Tuomo Ward 3, is plotting to defect to the party soon.

The statement said, “On behalf of members and executive of the APC in Tuomo ward 3, we would like to draw the attention of the leadership of the APC in the state and national level to a backdoor move by some clandestine individuals to register former Minister for Niger Delta Affairs, Elder Godsday Orubebe as a member of the party.

“In as much as the doors of the APC are open to everyone who wishes to be members of the party, we take exception to the likes of Orubebe whose outing during the collation of result for the 2015 presidential election almost disrupted the democratic process.”

It further stated that Orubebe who alleged that APC was an anti-Ijaw party prior to the 2015 general elections should not defect to the party which it once hated and called all manner of unprintable names.

“His performance as a super minister during the tenure of Presidents Musa Yar’Adua and Goodluck Jonathan, dictating the affairs of governance while in office for 7years after betraying members of the defunct All Peoples Party, APP, for a Special Assistant position under former Governor James Ibori calls for questioning on his personality.

“It is indeed funny that having described the APC as an anti-Ijaw party and that he will resign from politics if President Muhammadu Buhari was re-elected as president in 2019, we wonder why he is still dabbling in political matters five years after his outburst.

“We the people of Tuomo Ward 3 do not want him in the party, and are using this medium to warn those that are plotting to smuggle him into the party through the back door to desist from such actions because we will not condone such moves”, the statement added. 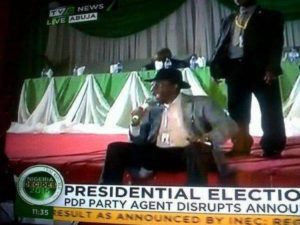