Activist Deji Adeyanju clashed with operatives of the Nigeria Police Force attached to the office of the Economic and Financial Crimes Commission where he submitted a petition to investigate former Lagos state, Tinubu over the bullion vans that were sighted at his residence on the eve of the presidential election.

In a video clip going viral on social media, the policemen had ordered his team to step out of the premises while he was about granting an interview to journalists.

Deji fumed at the order insisting that he would never understand them because when they are supposed to be in Lagos to arrest big criminals, they are busy harassing and intimidating ordinary citizens without guns and running after yahoo boys.

Petition submitted to @officialEFCC
but the ever unprofessional police at their office still wanted to intimidate us.

Watch the video below; 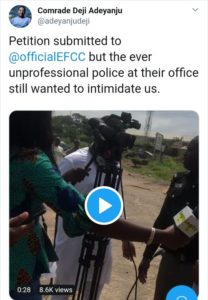