Lagos State, the most populous state in Nigeria, is one of the fastest-growing cities in the world. It is also considered as one of the world’s 36 mega-cities.

Lagos has one of the largest, most extensive, and busiest road networks in West Africa. Sadly, Lagos has an insufficient suburban train and some ferry services.

Transportation within the state is principally by road. This often leaves the internal roads and expressways congested at peak hours, due in part to the geography of the city, as well as its explosive population growth.

Shortly before the advent of the Lagos BRT, Lagos was regarded as the only megacity (defined by the UN as a city with a population of over 10 million) without any organized public transport system.

A new monorail system that is supposed to span the length of the Badagry expressway to Lagos Island is currently under construction.

Despite the introduction of the BRT bus system and over 800 new intra-city buses by the Akinwunmi Ambode-led administration, there is still a significant deficit of public mass transit vehicles in Lagos.

The photos below show the daily challenges of getting available mass transit vehicles faced by residents of Lagos state. 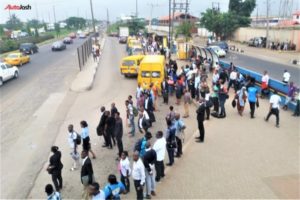