Hi everyone, welcome to my diary. Many of you might remember me from my previous diary about my life in Moscow, Russia. I moved to Saint Petersburg from Moscow and I’ve decided to open a dedicated thread to document my life as a foreign student in Saint Petersburg, Russia.

I’m a Nigerian student, I study at the Higher School of Economics Saint Petersburg Russia. This thread will basically document and share my life and daily experiences living in Saint Petersburg, Russia. I hope you guys will enjoy and find my diary interesting.

I moved to Saint Petersburg from Moscow towards the end of 2018 and it was mostly because the Saint Petersburg campus had suitable programs entirely taught in english, whilst the Moscow program only had Masters programs in English. The other option would have been to continue studying in Russian language at the Moscow campus, but here is the tricky thing. My university is a very prestigious university in Russia (Top 3 in the country) and the standards are very high. There is this thing in my university called dopsa, so if you fail 3 exams in a year, you’ll be expelled from the university and deported. So that means that out of 14 to 20 courses in an academic year, you can’t fail 3 courses or you’ll be expelled and deported as soon as possible. So I basically moved to Saint Petersburg to study in English because I do not know enough Russian to study entirety in Russian language and not fall behind in class. So my moving to Saint Petersburg was strategic.

A little about Saint Petersburg.

Some nights when I’m sad or worried about something, I just take a quick stroll down the historical city center. Nevsky propekt is so beautiful at night, brilliantly decorated lights, amazing architecture and so on… It’s the city of dreams and there is no headache or worry that taking a walk here cannot heal. Saint Petersburg is simply magical and I am a bit sad that I might have failed to accurately describe how beautiful this city is and I hope the videos and pics that will come later will be better.

Life in Saint Petersburg vs Moscow

I know many people are curious about this. I can’t pretend or lie racism doesn’t exist in Russia but Saint Petersburg is the most liberal city in Russia, so even though some kind of subtle systematic racism exists here, it is still the most welcoming city for foreigners in Russia. I will do a more in depth video or post about racism in Russia in the near future.

Like other cities in Russia, it’s still difficult to see black people here. Maybe because those that came in illegally during the last world cup don’t leave their apartments. But that aside, I think Saint Petersburg has a higher number of black people than other Russian cities. My university has at least 40 or more African students here at the Saint Petersburg Campus.

Last Semester, my university held its annual Culture fest and I was invited to represent Nigeria at the HSE Culture day 2019. I prepared jollof rice and at the end of the culture fest, my jollof rice was adjudged the best food at the fest. It was really exciting to know that many people were genuinely interested in learning about Nigeria’s culture, food and way of life. I’ll post pics from the event below.

Also with me were my friends Florence and her younger Sister Grace. They both go to my university and they are really wonderful people. Words alone are not enough to describe how amazing Florence and her Sister are. I remember last winter, I caught a cold, I couldn’t breathe properly and I honestly thought I won’t make it through the night but Florence and her Sis sat by my bed all night, with aboniki balm and prayed fervently for me till I fell asleep and when I woke up in the morning, I was better.
They’re super amazing and you guys will see more of them soon.

Also, I just opened a YouTube channel called Afro Rossiya TV. My aim is to document and share my first hand experience as a black foreign student in Russia so please subscribe to my channel.

Russians how they feel about Africans and Foreigners in their country so please watch, like and share my videos please. The opening of the video also has some aerial shots I took in Saint Petersbug.

So this is the beginning and welcome once again to my diary. 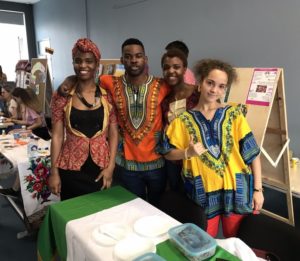