Africa can never be able to actualize her dream of joining the league of developed and industrialized countries as long as the West continues to dictate what happens in the continent. One wonders what was the parameter or yardstick used to allow the United States and some other developed countries to hold 40% shares of the African Development Bank (AfDB); a bank established to assist the development drive of the countries in African continent.

The emergence of Dr. Akinwumi Adesina, a Nigerian technocrat as the president of the African Development Bank was heralded as one of the best things to have happened to the continental bank, given his track records and what he was able to achieve as the Minister of Agriculture in Nigeria before his emergence as the president of the African continental bank. And Dr. Adesina has replicated same excellent performance all through his first five years as the head of the bank.

Adesina is said to have grew the African Development Bank’s capital base from $93billion in 2015 when he took over office to $208billion now, and this had never happened in the history of the bank. And this has become a major threat to the imperialistic West, particularly the United States, seeing the good work he had been doing and noticing that Africa has began to gain ground, as improvement has manifested suddenly, now want him out of office by all means.

His attempt to re-contest for the exalted office for a second term, and possibly the sole candidate for the job has not gone down well with the imperialistic domineering West, who wants to control the affairs of every part of the world by every means possible.

A plot was therefore orchestrated to tarnish his unblemished records and personality so as to force him out from re-contesting for the presidential stool of the African Development Bank, backed by the United States, with a possible backing of France who has a preferred francophone candidate for the job. Dr. Adesina was accused of violating Section 6.7.2 of the Whistle Blowing Policy of the Bank by breaching the confidentiality of the proceedings of the matter beyond submission to the ethics committee. Dr. Adesina in turn has accused the petitioners of disclosing their allegation beyond the committee, by acting in concert with others outside the African Development Bank system.

The ethics committee held series of meetings to review the documents and presentations as it conducted preliminary examination of the allegations against Dr. Adesina, to establish whether they were based on any objective and solid facts pursuant to Resolution No. B/BG/2008/11. And on 5th May 2020, the ethics committee of the board of directors of the continental bank said in its report that Dr. Adesina was not guilty of any of the 16 allegations contained in a petition brought before it by a ‘Group of Concerned Staff’ of the Bank .

The committee was headed by Takuji Yano, the institution’s Japanese Executive Director charged with the responsibility of investigating the allegations, described the allegations as ‘spurious and unfounded’ as Dr. Adesina didn’t violate any of the code of conduct of the Bank.

But the United States not satisfied with the decision reached by the ethics committee of the bank, demanded for an independent probe to the allegations levied against Dr. Adesina. One begins to wonder what the United States stands to gain to have demanded for a fresh probe of the accused. Or is there something the world still needs to know which is not contained in the petition brought against Dr. Adesina that she is still bent of achieving through the demand for a fresh probe. Or are they suggesting that the bank’s ethics committee members have questionable characters that will make them not to accept any decision reached by the committee. If Dr. Adesina had been found guilty as charged, would the United States still be asking for an independent probe as she is presenting doing?

The Nigerian government and the rest of African countries must not allow the United States to have their way, less, further activities and programmes of the bank, aimed at assisting the African continent to achieve the so much needed development will be undermined by the same forces presently pushing for the new probe and possible replacement of Dr. Adesina for some frivolous and unsubstantiated allegations presently being pushed against Dr. Adesina. The African continent must understand that this is not just a fight against one individual, but a fight against the development and collective interest of the continent.

The United States must be made to understand that their overbearing attitude cannot be allowed to hold sway at all times, particularly in this situation. Africa must stand up against this new form of imperialism, less, she will regret it where the United State eventually achieves her selfish plot against the interest of the African continent. 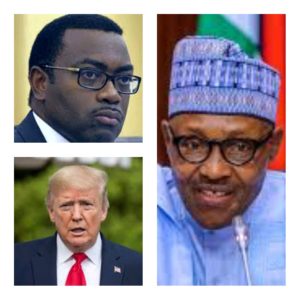