A commercial bus driver Ezekiah Andrew Ovotu 31 and his conductor Abdulmon Mustapha 32 have been arrested by operatives of the Lagos state police command Special Anti Robbery Squad(SARS) for using their bus to pickpocket their passengers along Oshodi Mile2 road in Lagos.

According to source, the operatives of SARS got an intelligence report of the suspects’ nefarious activities along Oshodi Mile2 through the Directorate of the State Secret Service (DSS) and arrested them after many days of surveillance.

In his confession, the driver Andrew assumed ” I am from Urobo, Orere village, Ugheri South, Delta pomp but I was instinctive and brought up in Lagos.

I had five credits without English and Mathematics in the year 2006. My father is late and mother too poor to take care of us and to assist my mother I decided to learn how to drive by following a commercial bus as a motor boy.

One day we arrested a pickpocket in our bus. His name is Sodiq a.k.a Okoye and he begged us with #20,000 to leave him.

Later in the day he came and met us and took us to a beer parlour where he bought beer and pepper soup for us and still dash me and my conductor #10,000.

He brainwashed us that pickpocketing with commercial bus is lucrative and that he used to make #50,000 or more on days he worked well and if we work together with him we will make good money.

The idea made us lazy as we started deliberating on it daily which affected our daily delivery to the bus owner.

Therefore, when our bus got faulty, the owner refused to repair it rather he took the key asked us to go.

When we met our friend Sodiq and told him that we have been sacked he told us not to worry and went and bought a fairly used bus and gave it to me to be driving.

He became the leader of a three-man gang of bus pickpocket with me as the driver, Mustapha as the conductor and Sodiq as the taker.

In his confession, Mustapha said “I am from Awori, Lagos. I am the conductor of the bus. My role is to shadow passengers who are loaded. Sodiq is the ‘taker’, taker is the one who does the pickpocketing in the bus.

Once the bus is shaking the taker will start work by tactically removing the passenger’s wallet or phone.

We don’t use gun nor force. If the passenger discovers that his phone or wallet had been removed we lie to him that it fell on the seat give it to him. Sodiq escaped when he saw the SARS operatives in their scorpion vests. 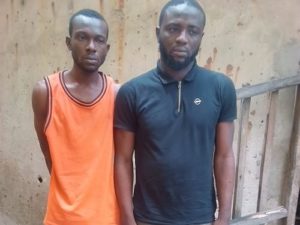