Edo APC Chieftain, Tony Kabaka mobilises people, including kids at his house to prevent Obaseki from demolishing his hotel building.

Tony Kabaka who is well known for being a member of the Oshiomole backed faction of Edo APC, EPM has been against Obaseki for a while.

This was after Obaseki issued Tony Kabaka a 7 day notice by Edo state Ministry of Urban Planning to remove his hotel which is located at Ugbor village, Benin City, Edo state for illegally occupying government land.

Tony Kabaka has been relentless in his anger and disdain towards Obaseki for using and discarding them afterwards, taking away their sources of income and in all, making life harder for them.

In a recent video making rounds, he was seen with children begging Governor, Obaseki not to demolish his hotel unless he wants him dead. 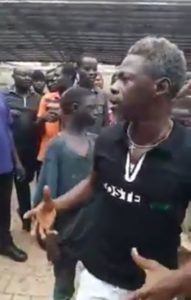