Edo State Governor, Mr. Godwin Obaseki, has disclosed that the cold war between him and his predecessor, Comrade Adams Oshiomhole, would soon be over, Igbere TV reports.

He disclosed that he has met with Oshiomhole and that efforts are being made to resolve issues which he said were created by third parties in the state.

Igbere TV reports that the governor gave this indication on Monday, when he called at the Iyamho residence of the former Labour leader and National Chairman of the All Progressives Congress (APC).

In his special Sallah message to the Muslim community, Obaseki had enjoined all citizens to eschew bitterness and rancour and work for the development of all of Edo State.

The governor may have demonstrated this with his visit to the Party Chairman and his mother, Hajia Aishetu Oshiomole, in spite of the obvious differences between both men.

During the visit, Governor Obaseki expressed his delight at the support he received from the Muslim community and reiterated his commitment to the transformation of Edo State and the empowerment of all its people.

Igbere TV reliably gathered that the visit was facilitated by Alhaji Aliko Dangote, Governor Kayode Fayemi of Ekiti State, who doubles as Chairman of the Nigerian Governors’ Forum; and his Kaduna State counterpart, Nasiru El-Rufai.

The trio are part of the Peace Committee constituted by President Muhammadu Buhari in his efforts in seeing that all issues surrounding the crisis are addressed.

A member of the Peace Committee told Igbere TV authoritatively that efforts are on top gear to ensure that all grey areas are addressed ahead Edo 2020.

“We had to make him (Obaseki) see reasons for the peace moves. We went to see the National Chairman uninvited, we know he won’t reject us since it’s a festive (Sallah) season and Sallah means peace”, he said.

He was, however, silence when asked if Obaseki would be issuing a fresh proclamation for the Edo State House of Assembly, with the recent moves.

Those in the governor’s visiting team include the Deputy Governor, Philip Shaibu; Secretary to State Government, Osarodion Ogie; Chief of Staff, Taiwo Akerele; Edo APC Chairman, Anselm Ojezua; Speaker of the Edo state of Assembly and some lawmakers in the state.

Watch the movement Obaseki’s convoy drove into the former governor’s compound and exclusive pictures from the visit, as obtained by Igbere TV. 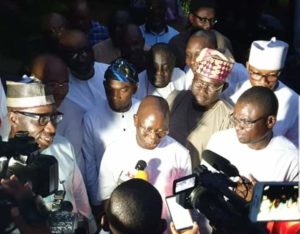